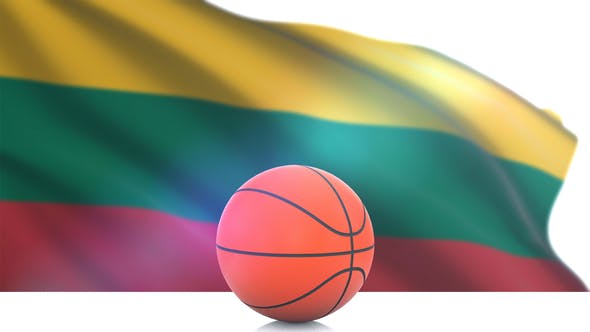 Forget football. In Lithuania, the national sport is basketball.

The home of 10 players who made it into America’s basketball league, the NBA, Lithuania is a country where kids grow up shooting for the basket rather than the goal.

There are several basketball schools in every major town and physical education in schools usually ends up in a basketball game.

Basketball is the most popular sport in Lithuania. Lithuanian basketball national team win the last EuroBasket tournaments in the 1930, in 1937 and 1939, causing a massive impact in Lithuanian society and a basketball popularity spike. Since then, despite Lithuania’s small size, with a population of just almost 2.9 million, the country’s devotion to basketball has made them a traditional force of the sport in Europe [1].

Basketball was introduced in Lithuania indirectly through the European variety of Netball, featuring a smaller ball and no boards, brought by the Germans. In the meantime, in 1922 Karolis Dineika released the book Krepšiasvydis vyrams (English: Basketball for men), and in 1926 pilot Steponas Darius, who would later be known for his transatlantic flight, published the first basketball rules in Lithuania [2,3].

Despite the fact that women were the first basketball players in Lithuania, the first official game was played by men. It took place on 23 April 1922 when Lietuvos Fizinio Lavinimo Sąjunga (English: Lithuanian Physical Education Union) played a game against Kaunas team. That day is regarded as the beginning of basketball in Lithuania. The press at the time described the match by writing: “The game was very interesting and left positive impression on the spectators. The observers were fascinated by the game so much that they felt living in a quite cultured country by watching our quick, joyful players. The audience heartily rejoiced at the gameplay of the excellent basketball players and applauded after shots and passes by Steponas Darius and Viktoras Dineika. Krepšiasvydis game, organized for the first time in Lithuania, gave beautiful hopes that in the future this game could lead our sportsmen to greater achievements”. Two years later, the first Lithuanian men’s basketball tournament in Lithuania was organized, featuring two teams from LFLS and one from Lietuvos Dviračių Sąjunga (English: Lithuanian Cycles Union), and a course for basketball referees was held. The first class included Elena Garbačiauskienė and Steponas Darius.

From 1926 to 1933, basketball saw its popularity decrease and get overshadowed by football. Basketball was played only during the summer period because there was no suitable indoor arena, and the game was mostly played by representatives of other sports, who allocated little time to it. The number of games played decreased, and the national championship was not even contested between 1929 and 1932. It started to change on 10 October 1934, the day where the Physical Culture Palace was opened in Kaunas. The building had a spacious hall with 200 seats, designed and built for tennis. To increase grip for tennis players, the hall had expensive cork floor installed, which cost over 30,000 LTL (over $5,000) when average teacher salary at the time was around 350-500 LTL and 150-180 LTL for an ordinary worker [4]. Being suitable for indoor basketball, the Hall hosted its first game on 16 November 1934, and soon became the main center for basketball events [5].

In 1936, Lithuania applied to become a member of FIBA and take part in international basketball competitions [6], the first being EuroBasket 1937, the second European basketball tournament that the Latvia Basketball Association would organize in Riga as reigning champions. Thus while basketball would become an Olympic sport at the 1936 Summer Olympics in Berlin, Lithuania decided not to take part in the tournament, instead preparing for the following year [7]. During the Olympics, one of the gold medalists, Frank Lubin, was of Lithuanian heritage. He spent five months there and served as the country’s first knowledgeable coach, helping spread various basketball techniques [8,9]. Lubinas led Lithuania to its first victory over Latvia, 36-25 [10].

Later years was vicissitudinous for Lithuania basketball. Years in W.W.II, Soviet period (1947-1990). Once Lithuania became the first Union Republic to declare independence on March 11, 1990, the Soviet Union national team did not even qualify for the EuroBasket 1991 [11]. Games between Žalgiris and CSKA, as well as games between Lithuania and Russian national teams, still have extra spice in them nowadays.

First ever Lithuanian Consulate in Iran

The ranking draws on the wider Best Countries 2020 ranking and... read more

The economy of Lithuania is the largest economy among the three... read more