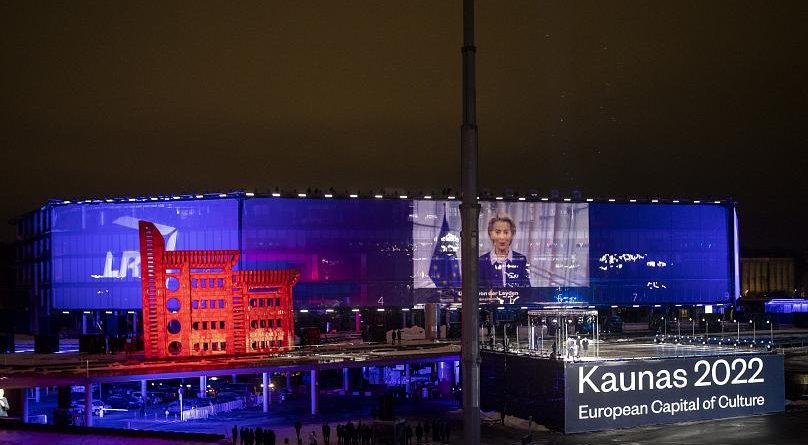 Lithuania’s second-largest city of Kaunas on Saturday kicked off its Kaunas – the European Capital of Culture year with the opening event Uprising, seeking to show Lithuania and the world the city’s cultural potential.

Some 40,000 free tickets were distributed for people to attend the opening event outside the Zalgirs Arena on the Nemunas Island.

Also in attendance, UNESCO Secretary General Audrey Azoulay said the pandemic showed how closely people are connected through culture and important it is for every human being personally and the whole society.

The Kaunas ECC was launched with the show Uprising during which a moulage of a well-known “ghost” building in Kaunas was symbolically destroyed, marking Kaunas’ evolution from the country’s temporary capital into a modern one.

Under the idea, Uprising was supposed to wake Kaunas’ mythical beast up and Kaunas residents and guests are invited to look for it the whole year.

“The start is very interesting. Let’s hope Kaunas will show everything it can as it has really not been very much appreciated, especially culture-wise, and as a city on the whole, being somewhat temporary, and now it’s become a true capital, I think,” Arunas Lukosevicius, 75, told BNS during the opening.

The program authors say the ongoing pandemic has forced to adapt event plans significantly, putting threat on events, but it has also become an interesting challenge encouraging the organizers to look for new forms. The creators hope Uprising will act as an impulse and will wake the city and its residents up and will disclose the city’s potential for the Lithuanian and international community.

All in all, Kaunas as the European Capital of Culture will offer over one thousand events, including more than 40 festivals, over 60 exhibitions, over 250 stage performances, including 50 premiers, as well as more than 250 concerts. Over 4,000 performers will take part in the program.

Lithuania is considering introducing quarantine on Monday due to the coronavirus threat.

:provides an overview of 15 restrictions under consideration (more…) read more

Lithuania is opening its pavilion at the Venice Architecture Biennale on... read more